Patients who suffer a sudden out-of-hospital cardiac arrest (OHCA) may be preceded by warning symptoms and healthcare system contact. Though, is currently difficult early identification of sudden cardiac arrest patients.

We aimed to examine contacts with the healthcare system up to two weeks and one year before OHCA.

OHCA patients were identified from the Danish Cardiac Arrest Registry (2001-2014). The pattern of healthcare contacts (with either general practitioner (GP) or hospital) within the year prior to OHCA of OHCA patients was compared with that of 9 sex- and age-matched controls from the background general population. Additionally, we evaluated characteristics of OHCA patients according to the type of healthcare contact (GP/hospital/both/no-contact) and the including characteristics of contacts, within two weeks prior their OHCA event.

Out of 28,955 OHCA patients (median age of 72 (62-81) years and with 67% male) of presumed cardiac cause, 16,735 (57.8%) contacted the healthcare system (GP and hospital) within two weeks prior to OHCA. From one year before OHCA, the weekly  percentages of contacts to GP were relatively constant (26%) until within 2 weeks prior to OHCA where they markedly increased (54%). In comparison, 14% of the general population contacted the GP during the same period (Figure). The weekly percentages of contacts with hospitals gradually increased in OHCA patients from 3.5% to 6.5% within 6 months, peaking at the second week (6.8%), prior to OHCA. In comparison, only 2% of the general population had a hospital contact in that period (Figure). Within 2 weeks of OHCA, patients contacted GP mainly by telephone (71.6%). Hospital diagnoses were heterogenous, where ischemic heart disease (8%) and heart failure (4.5%) were the most frequent.

There is an increase in healthcare contacts prior to "sudden" OHCA and overall, 54% of OHCA-patients had contacted GP within 2 weeks before the event. This could have implications for developing future strategies for early identification of patients prior to their cardiac arrest.

Figure. The weekly percentages of contacts to GP(red) and hospital(blue) within one year before OHCA comparing the OHCA cases to the age- and sex-matched control population (N cases=28.955; N controls=260.595). 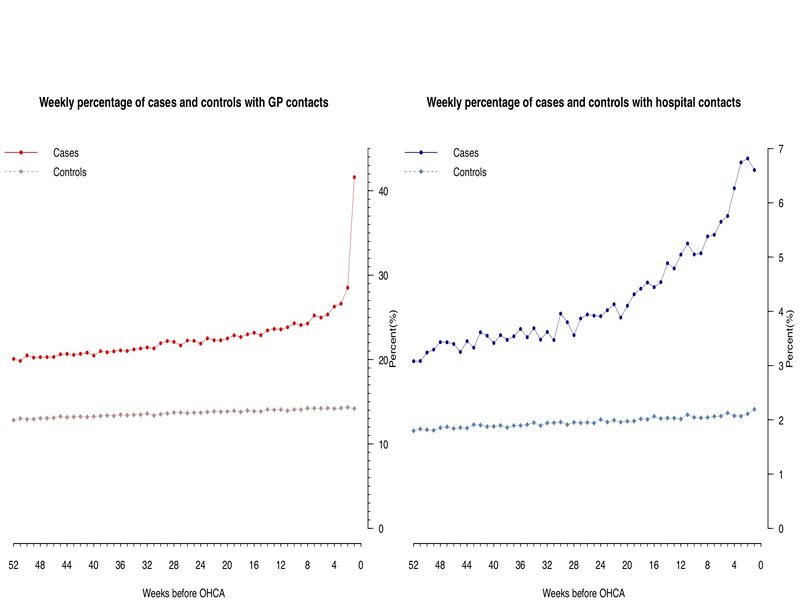