Citation: N/A
Background
Remodelling of the left ventricle (LV) after anterior myocardial infarction can result in a pathological increase in LV volume and reduction in LV ejection fraction (EF).

Purpose
We describe the mid-term results of a novel hybrid transcatheter and minimally invasive surgical technique to reconstruct the remodelled LV by plication and exclusion of the scar and reduction of the excess volume, resulting in decreased wall stress and increased EF.

Methods
Patients were considered eligible for the procedure when the presented with symptomatic heart failure (NYHA-class II or more) and ischemic cardiomyopathy (EF<40%) after anterior myocardial infarction. All patients had a dilated LV with either an a- or dyskinetic scar in the anteroseptal wall and/or apex of > 50% transmurality.  An hybrid transcatheter and minimally technique was used that relies on deploying a series of paired internal and external micro-anchors to plicate fibrous scar of infarcted anterior wall myocardial tissue to reconstruct the LV.

Results
Between October 2016 and January 2020 24 patients (21 males, 3 females; mean age 61 ± 13 years) were operated in a single Dutch centre. Procedural success was 100%. On average 2.3 ± 0.9 anchor-pairs were used to reconstruct the LV. Comparing echocardiographic data pre- and directly postoperatively, LVEF increased from 34 ± 9% to 44 ± 11% (change +34%, P<0.0001) and LV-volumes decreased: LVESV 113 ml ± 54 ml to 68 ± 41 ml (change -39%, P<0.0001) and LVEDV 166 ml ± 75 ml to 116 ± 57 ml (change -30%, P<0.0001). One patient was converted peroperatively to full sternotomy, ECC and cardioplegic arrest because of partial dislodgement of an apical mural thrombus. After removal of the thrombus, the LV was reconstructed with 2 anchor-pairs. One patient underwent a postoperative revision because of RV restriction. After removal of 1 "RV-LV" anchor-pair, the patient made a full recovery. One patient underwent an uncomplicated minimally invasive tricuspid valve replacement because of a lesion to the tricuspid valve during the procedure. Hospital mortality was 0%. Median duration of ICU–stay was 2 days (IQR 1-46 days) and median length of hospital stay was 7 days (IQR 5-57 days). Survival at 36 months was 88%. At latest follow-up, 86% of surviving patients were in NYHA-class I-II compared to 21% preoperatively.

Conclusions
Hybrid transcatheter and minimally invasive LV reconstruction is a promising novel treatment option for patients with symptomatic heart failure and ischemic cardiomyopathy after anteroseptal myocardial infarction. Mid-term results demonstrate that the procedure is safe and results in significant improvement in EF, reduction in LV volumes and improvement in heart failure symptoms. 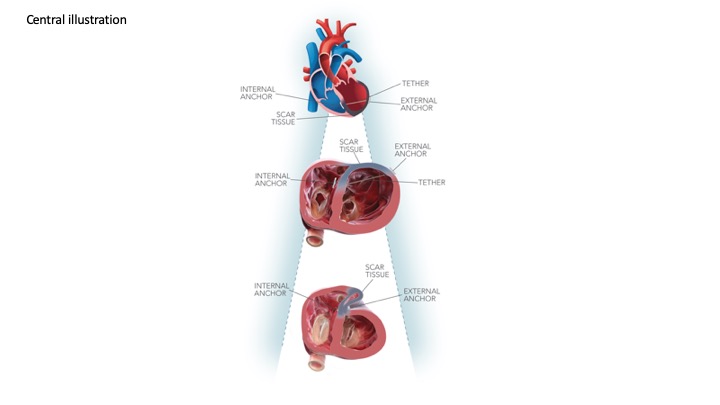