Purpose: We compared risk of heart failure hospitalization (HFH) or death versus ischemic events in real-life HF patients with new-onset T2D, prevalent T2D and no T2D.

Methods: Using the Danish nationwide registers, we identified all patients with HF between 1998-2016. The patients were separated in two different HF cohorts based on the status of T2D. One cohort consisted of HF patients with either prevalent or absent T2D at the time of HF diagnosis. The other cohort consisted of HF patients, who developed new-onset T2D, included at time of diagnosis. The two HF cohorts were analyzed separately. Outcomes for both cohorts were analyzed as time-to-first event as either an ischemic event (i.e. composite outcome of fatal and non-fatal myocardial infarction, stroke, and peripheral artery disease), HFH, or event-free death (not related to HFH or the ischemic event). For each cohort, we estimated the five-year absolute risk of ischemic event, HFH and event-free death, along with five-year risk ratio of HFH or event-free death versus ischemic events. Effects among subgroups were investigated by stratifying both cohorts based on age, gender and comorbidities present at inclusion. 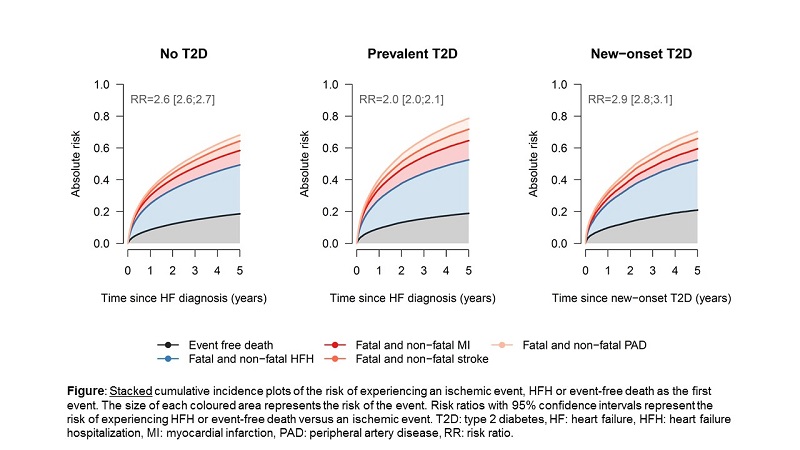