Does Evolocumab use in Europe match 2019 ESC/EAS lipid guidelines? Results from the HEYMANS study

On behalf: The HEYMANS investigators

Citation: N/A
Background: 2019 ESC/EAS dyslipidaemia guidelines recommend a 50% lowering in untreated LDL-C and use of PCSK9 inhibitors (PCSK9i) for patients at very-high cardiovascular (CV) risk when LDL-C target goals of <1.4 mmol/L or <1.0 mmol/L (for those with 2 CV events within two-years) are not met despite maximally tolerated statins and ezetimibe.

Conclusion: In Europe, patients initiated on evolocumab had baseline LDL-C levels almost 3 times higher than the present threshold for PCSK9i use, reflecting local reimbursement criteria. Evolocumab resulted in a more than 50% reduction in LDL-C; however, only approximately half of all patients achieved an LDL-C < 1.4 mmol/L. LDL-C goal attainment was higher among patients receiving evolocumab with background LLT, suggesting that achievement of EAS/ESC LDL-C goals requires multiple LLTs and a lower threshold for PCSK9i initiation. 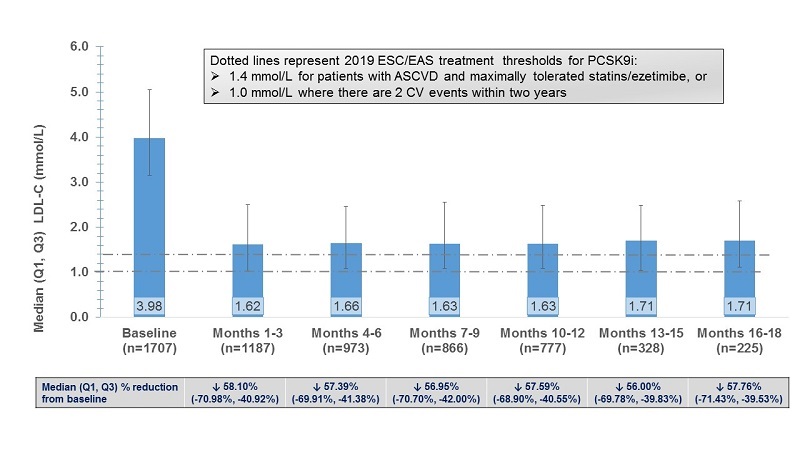